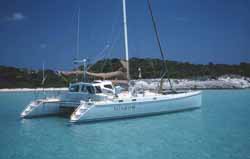 The A46 has been replaced by more current designs, including the A47 MastFoil and the A48.

There were six A46's built, and they logged impressive mileage.  One circumnavigated, another carried a family of 4 on a multi-year cruise of the US east coast, Bahamas, and extensive exploration of the Mediterranean.  A third was built in New Zealand and cruised extensively in the Pacific.

Owner Comments on the A46

Mark McGreggor, co-owner/builder of the A-46 'Great White'
"As you've heard we're just back from an incredible winter. The boat was everything we had hoped for and more. We put some eight and a half thousand nautical miles on Great White offshore from Halifax, Nova Scotia to Bermuda (wicked) then south to Tortola and every island down to Trinidad including an easy one tack beat out to Barbados. 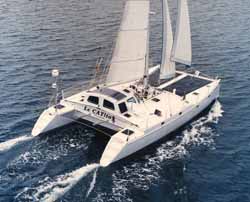 We saw some wild weather after leaving Canada, a ship clocked an official 82 knots of wind one night. Great White rode the storms extremely well, great job on that hull shape. She climbed back up and out of troughs that looked like they would just swallow us. We had waves picking us up by the floor when running with a storm around the Gaspe' peninsula and just burying the front beam into the sea in what should have been a real scary point of sail but those upswept bows just kept coming back up. Dynamic sailing though, 25+ knots at times!"

Stewart Volpe owner/builder of the A-46 'Barn Cat'
"After 9000 miles of sailing the Atlantic 46, the characteristics that most impress me are how fast and comfortable the boat is at sea. The forward cockpit/aft pilothouse layout, slender hull shape, and powerful rig make a wonderful combination. The pilothouse offers great protection from the elements and excellent visibility. The boat is responsive and a joy to sail between 13 and 20 knots of hull speed. This design helps make sailing fun and safe." 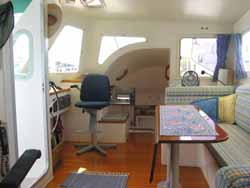 "My rational mind knows she's the ultimate cruising cat. She's always comfortable. At sea the pilothouse is no nonsense and professional. She's easy to singlehand. She sails great and there's more. But the more important truth is - even after 10,000 miles - I still love the way she looks."
--Or from Linda, "Her galley is nicer than some of our kitchens."

Tom Bohanon and family, aboard Atlantic 46, 'Bearcat'
"Beyond all the normal reasons to have a catamaran (room, flat platform, comfort and livability, speed), Bearcat's pilot house makes me wonder why anyone would have anything else, given the choice. The ability to be fully enclosed and underway in a storm, on a cold night, or when it's mealtime is not to be underestimated, and it happens a lot. Overall I guess we do around 75% of the steering from inside, and the visibility is great. Family life centers there, and many a day has been passed with one of us steering while helping the kids with school or art projects. I laughed a few months ago when during one passage in the Bahamas that saw us on a very close reach at around 9 knots, and Kelsey was doing water colors at the pilothouse table, asking me for comments while I steered. It's a good life. 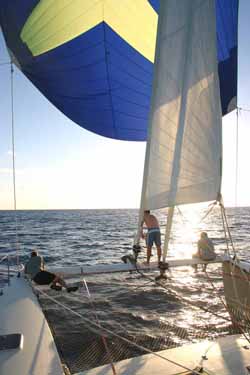 I could go on and on, but other features that we notice, enjoy, use a lot, or you may not have even thought of include: huge galley with tons of counter space-need every bit for liveaboard; speed, great layout for family of 4, kids one side, parents the other hull; very secure feeling in the cockpit, and the visibility is unequaled; entry way to pilot house excellent for cleaning fish while underway in rough seas (cleans up well, safe, stable), also good for hermit crab domicile; speed; aft engines and separate engine compartments nice for noise reduction and mess containment, and excellent garbage storage around the rudder posts under the transom steps; did I mention speed? Bearcat does not go as fast as she looks like she could with a lighter load, but I think we have a good balance between the livibility/weight vs speed/performance issue. That said, I would like to have her lighter. In any case, we have yet to be passed, and the joy in passing other boats is real and heartfelt. Especially trawlers. And big mega-yacht motorsailers. And classic 120' schooners." 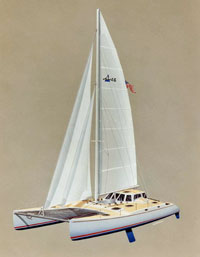